Traders have been left devastated after a major blaze ripped through a bowling alley and indoor market.

Twenty-two fire engines were called at about 03:20 BST to the Regent Superbowl and indoor market in Great Yarmouth.

The blaze engulfed the Regent Road building, causing it to partially collapse.

Stephen Cook, who runs a memorabilia stall, said he had up to £150,000 worth of uninsured stock there.

“Everything which has taken me the last three years to build from scratch has gone overnight,” he said. 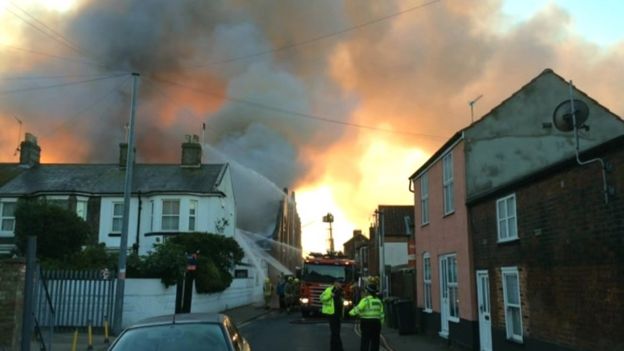 The fire has gone through the roof, the building on Regent Road has partially collapsed, and is full engulfed by fire

Eighty firefighters have been tackling the fire, and people living nearby have been led to safety.

More than 100 homes have been left without power as UK Power Networks makes the area safe. 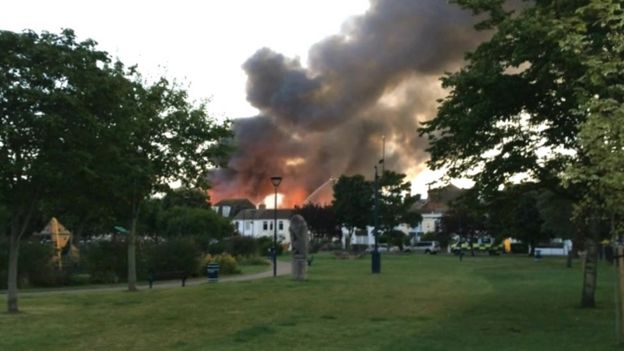 Twenty-two fire engines were called at about 03:20 BST to the Regent Superbowl in Great Yarmouth 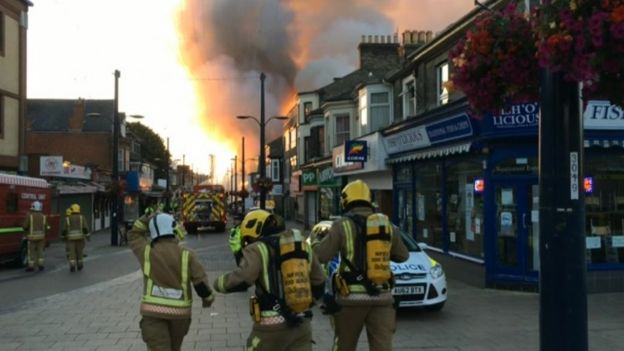 People living nearby have been led to safety

Phil Thompson, the owner of Regent Superbowl, told the BBC: “I got a call at 04:00 BST and came down here and could see the smoke.

“I felt sick inside. After four years of back-breaking work to get it where it is. It’s been the best season we’ve had. All the indoor units are full. I feel sorry for all the traders (in the indoor market), many who won’t be insured.”

He said firefighters have told him there is “not a lot left of the building. It will have to be pulled down“.

The plume of smoke could be seen from up to 11 miles away in nearby Acle and Lowestoft, and some onlookers said they could smell burned plastic and timber.

Assistant Chief Fire Officer David Ashworth said: “It’s a significant incident for us. Because of the building involved and also the surrounding buildings, it was really difficult to contain the fire spread.”